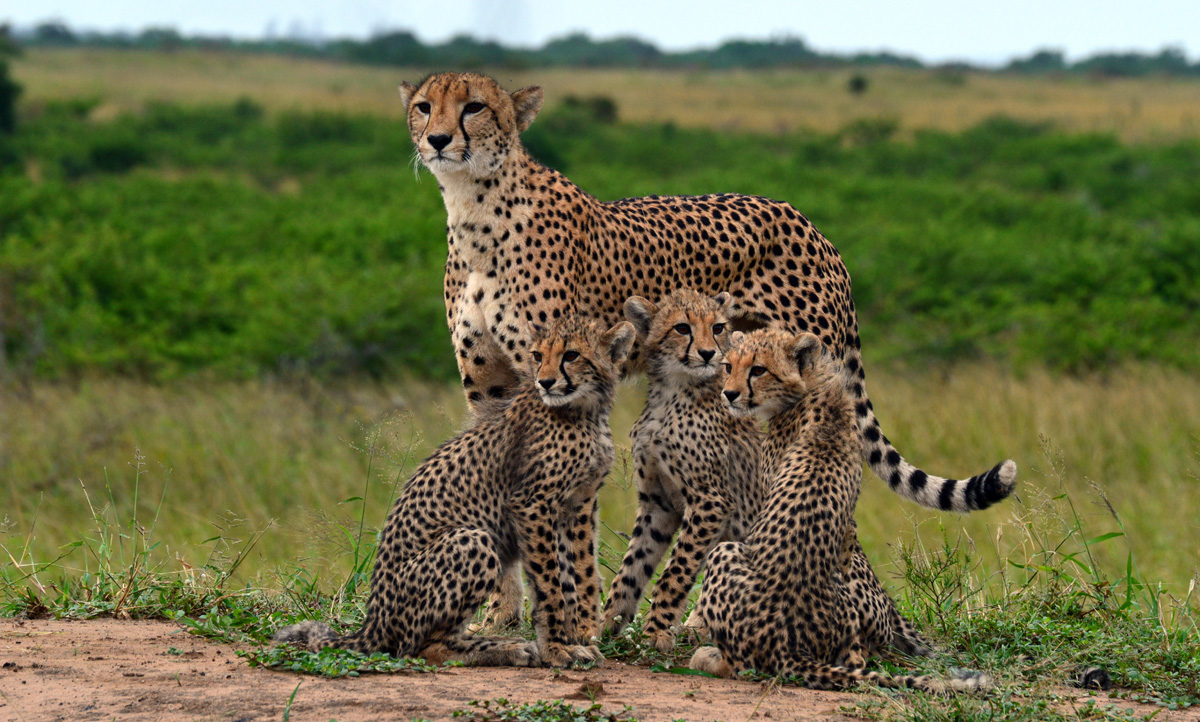 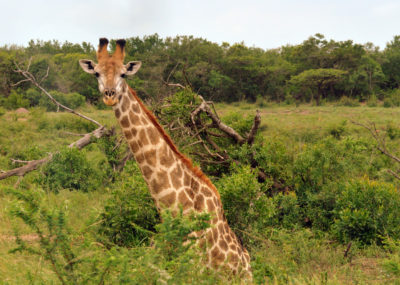 The Pearly Grey gang woke up bright eyed and bushy tailed ready for some Animal magic. We headed out of Durban with James at the helm of our minibus. The excitement in the bus was electric; this was certainly a high point of the trip for all of us…… as said once by a wise traveller “The only man I envy is the man who is yet to visit Africa for he has so much to look forward to”. We will all vouch for that! The exciting part of this was that apart from Ana none of us had been on a Safari before…… The anticipation was definitely in the air!

Upon arriving at Phinda, James registered us at the main gateway and then the doors opened to the vast African landscape. You remember the feeling in Jurassic Park when they open the world of unknown wilderness and the magic begins….. well that was us – living the dream! I still believe I could hear jungle drums in the distance, or some dynamic action music! Considering that this was actually only the drive up to the lodge our day started in a splendid fashion! Out on the horizon we could see Giraffes popping their heads through the trees, even some striding over to greet us. At the road side we drove by a dazzle of Zebras…… teasing us with their cantering beauty. Creeping through the bushes we captured a couple of Warthogs so close we could see their little tusks protruding at the side of their mouths…… A cool gang of buffalo chilling out munching grass…..this was just magic! The list goes on, even a pair of Rhinos came out to say hello …..You could see it as a chapter from Jungle Book…. Just makes us want to sing!

Maybe they had all heard that the HOD’s from Pearly Grey had come for a visit and wanted to check us out! Then as if from nowhere, standing proud we caught a glimpse on the horizon of two female Lions. Just to demonstrate their dominant presence….. Now if that wasn’t a taste of what was to come I do not know what is! This is the land of “The Big Five” after all, as the myth of unknown is now gracing us with a taste of a magnificent array of wildlife and experiences that will touch the very base of our souls forever!

We arrived at the Lodge and couldn’t have wished for a better greeting, the Phinda Team were all out waving to us at the entrance, offering cooling refreshments and chilled hand towels. Lunch was served with the most beautiful back drop of the amazing African landscape that has left an imprint on our memories with its beauty. We could even hear in the distance the animals calling for us to come and visit. 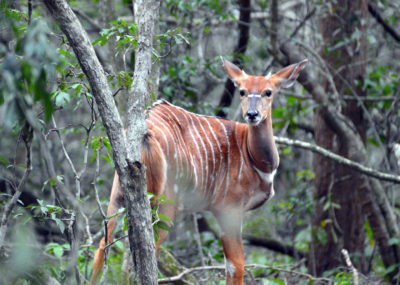 We were then escorted to our architectural masterpieces which will be our home for the next 24 hours. The individual lodges lie within the dry sand-like forest, discreetly stood on wooden stilts with huge glass windows allowing the “outdoors – in”. The connection with the forest was so cleverly styled that they could easily go unnoticed.  Justine and Gemma opted for a little “Absolutely Fabulous” moment and decided to take the hostess up on her offer of a little afternoon aperitif in their lodge…… margarita “a la Africa”, just fabulous darlings! Cheers to animal magic…….Upon enjoying this moment on their jungle veranda they spotted a “thing” in the trees. Always be the curious one, Gemma took a closer look and realised it was a female deer- like antelope checking them out. She made her way outside to get a closer picture and suddenly a sense of fear that it could charge at her at any moment she darted back quickly to the safety of the lodge. Well you should have seen them like a sketch “ European girls adapting to the African bush” hilarious.

After unpacking and settling into our Jungle paradise we all headed back with the group and Justine and Gemma regaled the team with their encounters with their antelope as if they had just been a pair of brave rangers, “a la Bear Grylls” much to James and Karen’s amusement. They explained to us all that these Impalas are like rabbits in the British countryside, they are everywhere and very harmless. Tame little beauties but they gave the girls a moment of madness to remember!! 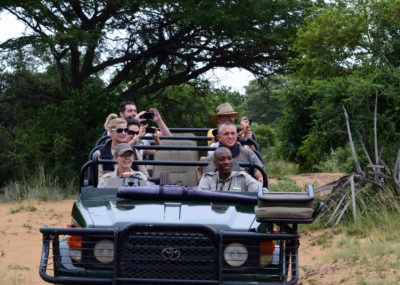 So we headed out for the first of our two game drives (one evening and one morning). Taking up two humongous Jeeps we join our experienced rangers and their Zulu trackers. Within moments they receive word over their inter-radio communications with other fellow rangers that a lone Elephant cow had come into the area just close by to our Lodge so we head out the find her. There she was in all her glory standing amongst the trees happily feeding and unfazed by our presence. Our first viewing of an Elephant in the wild……Wow! I know this is a special moment for most of us. We all sit and watch in awe of her surprisingly delicate stance, the power and strength of this mighty animal just surpasses all our expectations. 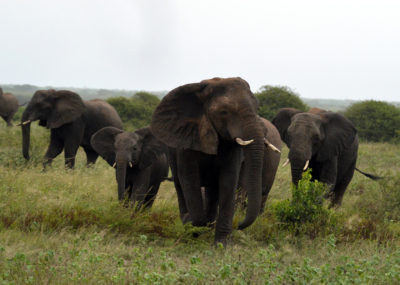 We continue on with our drive in search of the Lions. But before we know it our tracker has spotted a herd of Elephants on the horizon….. I mean 20-30 of them….. So far in the distance they look like an army of ants! Now this gets us all excited! Our ranger strategically positions the jeep, directing a mother and daughter rhino off the road out of our way which normally would be a moment in itself….. His aim was angle us so the stampede will run in front of our vehicle. He explains his idea is to avoid “us being in an elephant sandwich” apparently this is not on our desired menu of the day. Within no time here they come running towards us……. The stampede unnerves us a bit but our ranger confidently explains that the reason they are running is to get out of the wind, who would believe it! They feel vulnerable in open spaces and the wind upsets them. With this he explained that they see us as an animal and not a threat, so just sit still and do not make any rash movement ……just relax and enjoy the moment. And that we did…… We saw the bull of the heard mating with one of the cows and the matriarch bossing and guided the others into the trees along with a few babies clumsily intermingling in stride. This was just Elephantiasic!!! 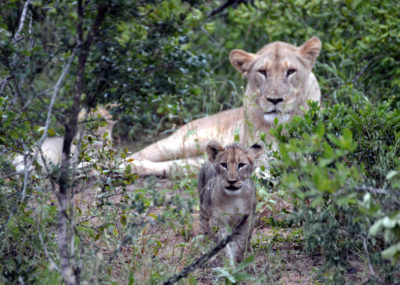 Our ranger was extremely satisfied with this sighting as normally he has to take his guests on a 1-2 hour drive to get that kind of show…… You see they must have “herd” we were coming to town too! You would think it difficult to top this moment but upon our return to camp we stop by to take a glimpse at a mother Lion with her two baby cubs. The ranger knew roughly where they would be as the mother will make a kill every 2 – 3 days to feed and then will move the cubs to a new location so as not to attract other predators to the camp with the smell of the residue of her kill. So there she was sitting proud with her little playful beauties. We kept a distance and watched them for a little while play fighting with each other while mum had a “cat nap”.

Time for quick glass of champagne in the bush before heading back for dinner….. Well so was the plan! This moment was quickly interrupted by a change in weather, we had been experiencing a few rain showers during our drive but now the heavens opened. With a spectacular display of thunder and lightning the rangers started to get anxious and wanted to deliver us back to our abode intact. I have to say this erratic weather just added to the excitement of the day, it set the scene and made it all that more exciting. 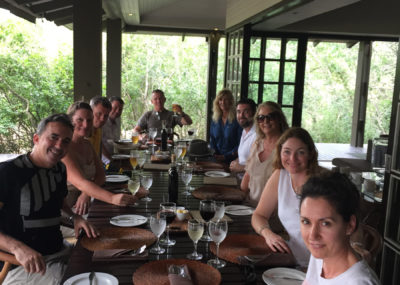 We returned back to the lodge for a team dinner fit for a king, regaling each other or our excitement and feelings of the day then settled down for an early night in our “romantic cabins”. We all shared a little joke as it has to be the most romantic evening we had all had – without our spouses….. Good night team PG….don’t let the bed bugs bite!!!

Knock-Knock rise and shine its animal time……..we all received an early morning call – a tap at the door from the lodge crew at 05:00am. The sun was starting to rise through the trees as we prepared ourselves for “round two”. Heading out with our safari hats donned for the second time round. We agreed that we’d had our fill of the larger species of the “Big Five” so our plan of action was to find some “cats” and that we did. Low and behold there we had them just a 20 minute drive out. Three Lioness sisters hanging out “literally” in the trees. Now this is a rare sight even the rangers got their cameras out. We must have sat and watched these beasts for a good hour frolicking and play fighting together almost as if they were putting on a performance for us. Well we had front stage tickets for this event……. It was Lionazing! 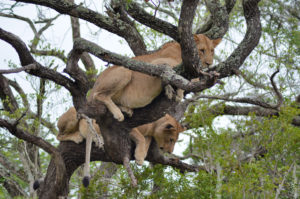 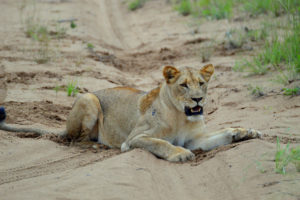 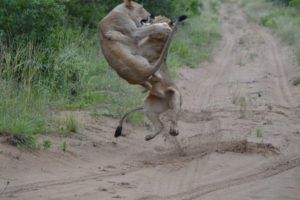 Magically after the lion show we headed further into the open lands “Cheetah territory” and our tracker did us proud. He spotted a mother and her cubs miles away….. Seriously, an untrained eye would just have driven straight past without a second glance. We off-road tracked a bit to cut the distance between us apart and approached her….wow she was spectacular. Again unaware of our presence, so bizarre! She was on edge and nervously allowing her cubs to play while she stood tall on the termite hill surveying the surrounding fields for predators.  Such a great mum, the ranger explained to us that she had probably given birth to 5 cubs but sadly now has 3 as nature goes these little cubs are a snack to the other predators. They actually only have only a 10% chance of survival, making us feel very privileged indeed. What a delight to finish off our day….. The illusive Leopard remained a mystery, maybe leaving something for us to come back for…….. Moments of a lifetime! 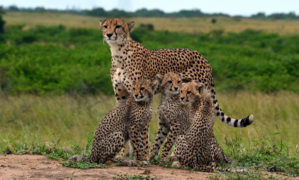 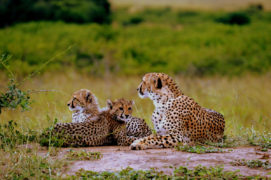 Phinda is a Zulu word meaning “the return”, which signifies that this game reserve was the location of one of the biggest reintroduction’s of game in Africa. Many years ago the area was restocked with Lion, Rhinoceros, Buffalo, Elephant, Leopard, Giraffe and other big game. They conserve without interrupting the natural way that these animals behave. The rangers explain that they only intervene with the animals if they are an endangered species otherwise they are left to their own devices. . Millions of years ago the sea would have lapped at a shore nearby and there were sand dunes. But the sea has long retreated, creating a unique forest ecosystem. Incredibly the leaf litter here quickly disappears as it is consumed by the vast inhabitants of the Termites of which the Cheetahs are extremely grateful for! It has indigenous plants and fauna that are found nowhere else in the world. This award winning game reserve is rated one of the most luxurious destinations in the country ……. and we just loved it!