How to Experience La Gomera With A Stunning Jeep Safari Adventure 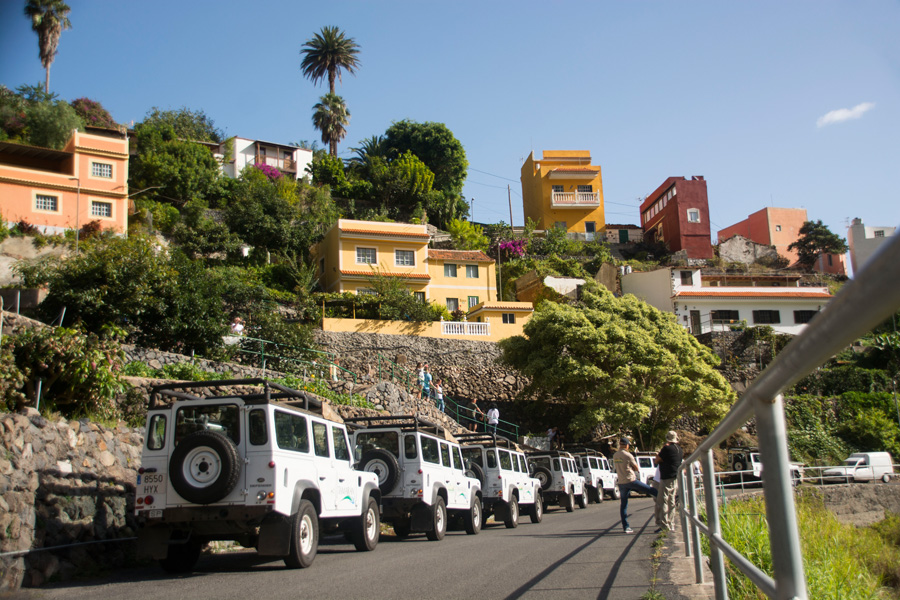 If you are a regular guest at Pearly Grey Resort, then it almost goes without saying that you love the island of Tenerife. With its beautiful year-round warm sunny climate, welcoming local population, fascinating traditions, gorgeous natural landscape and wonderful urban areas, not to mention the many great features of Pearly Grey, it’s obvious why it’s such an amazing island to stay on.

Of course, there are also seven other islands which officially make up the Canary Islands archipelago (with the recent official recognition of La Graciosa), and each are unique and amazing in their own right. Due to the direction that Pearly Grey faces, you will no doubt have gazed out across the ocean and noticed La Gomera on the horizon and may have wondered what it would be like to explore, especially as it’s so close!

Now, here at Pearly Grey you have the perfect opportunity to experience the incredible island of La Gomera on an exciting jeep safari, with the excellent Tamarán Routes!

Who wants to visit La Gomera?

Gemma (head of reception) and some of our team recently took the La Gomera Jeep Safari with Tamarán Routes and it was an absolutely superb day of adventure. We were collected by our friendly driver and guide Neil from the resort reception in the morning. Neil speaks perfect English and Spanish, due to his British parents, but having been born in Tenerife and living here all his life.

As most of our guests at Pearly Grey are native English speakers, it made a big difference that Neil spoke the language so well and having a bilingual guide is a big plus point for tours of this nature. Our transport for the day, an almost pristine Land Rover Discovery, also added a lot to the experience as it really added to the feel of being on a safari adventure.

From our collection point, we headed to Puerto de Los Cristianos to catch the 9am Fred Olsen express ferry. The ferry is clean, comfortable and modern with plenty of facilities on-board including food and drink, a gift shop and free wifi. It was an absolutely clear and beautiful day and we enjoyed a wonderful view of Tenerife as we set off from Los Cristianos, and then stunning views of La Gomera as we arrived at San Sebastián de La Gomera, the island’s charming capital city.

From here, Neil let down the roof of the Land Rover and we set off on an exciting exploration of this fascinating island which is full of charm and natural beauty. During the day you will discover a lot of fascinating information, with various different stops along the way, where your guide will take time to explain different information to you. We learned that La Gomera is the only one of the Canary Islands where the volcanoes are considered to be extinct as there has been no volcanic activity there for over 10,000 years! The island has a circular, half-spherical shape, but due to erosion from the weather over thousands of years there are a series of different steep barrancos (ravines), one of which is where the capital is situated, with other towns and villages in others.

The island is very mountainous and steep, meaning the pace of life is fairly tranquil and slow as there are no major roads on the island and little traffic, plus a small population of only around 22,000 people, with just under half living in the capital city. The rest of the population are dotted around in smaller towns such as Agulo, what must be one of the most picturesque traditional towns of the Canaries. It was also our driver Neil’s favourite and it was easy to see why with its colourful buildings, quaint narrow streets, surrounding cliffs and beautiful ocean views!

Considering how much smaller the island is than Tenerife, it is incredible how diverse it is, with the warm, sunny coastal areas, steep cliffs and ravines, and mistier cooler areas at the higher altitudes on the island, with the highest peak Alto de Garajonay rising to 1,487 metres! As we drove around the island and up and along windy roads we took in some absolutely breathtaking views, across at the mountainous landscape, various different types of plant life, fascinating natural rock formations, and the surrounding ocean.

We drove through banana plantations and past various other types of crops such as grape vines, mango, avocado and papaya trees and more. Many of these plants are grown using the traditional terracing system on the island which as Neil explained traps the water and makes growing crops much easier than if the land had just been left as steep cliffs. Many of these terraces have now been left abandoned due to a lack of those willing to work the land, but many remain active as family plots next to houses, growing an abundance of delicious fresh fruit and vegetables helped by the superb Canarian climate!

Half-way through our tour we were taken to the wonderful Las Rosas Restaurante for a delicious three course meal including soup, bread and mojo sauce for starter, a choice of main including vegetarian option and desert, plus wine and water, all of which was included as part of our Jeep Safari excursion. The icing on the cake of our meal, was the sublime view from the restaurant and a fascinating display of the amazing whistled language Silbo Gomero which is native to the island.

This incredible language was used traditionally by the original inhabitants to communicate up to 2 miles away across the ravines of Gomera. Following the their conquest of Gomera, the Spanish adapted and continued to use the language, but over time it began to die out, until the local government ordered that all school children should learn it for its preservation. Some experts believe it is useful for  helping to study the origins of language itself.

Later on we taken to the mesmerizingly beautiful forest of the Garajonay National Park, located in the centre and North of the island which was declared a UNESCO world heritage site in 1986. It is absolutely astonishing to find such a forest when you contrast it to the palm trees and cacti of the coastal areas. The forest is ancient and resembles what much of the rest of Europe would have looked like before the last Ice-Age. With the tall, ancient moss-covered trees, you feel like you are entering some kind of enchanted forest which is especially enhanced by the stillness, peace and quiet that is truly wonderful to experience.

Following this fairytale forest experience, we then continued our journey onwards back towards the capital city, taking in some more incredible views along the way. Once we reached the port we were given around one hour to explore San Sebastián de La Gomera a little, taking in the picturesque main pedestrianised shopping street, the church and the plazas surrounded by palm trees and bars, cafes and restaurants. In a way it was difficult to imagine that this was the capital as it was so relaxed and calm, but then again it was simply a reflection of the laid back nature of La Gomera as a whole. Tenerife has a huge amount going for it, but much of the island is quite crowded, noisy and fast paced, so a La Gomera offers a refreshing contrast.

After a wander around the capital and our day of island discovery, it was time for our 5:30pm ferry ride back to Tenerife. This time we were treated some magnificent views of the Gomera coastline as we left the port, accompanied by a lovely light as the sun had begun to dip down in the sky towards the horizon. Once back at Los Cristianos, the contrast was incredible with traffic, noise and development everywhere. We were driven back to Pearly Grey and dropped off by Neil, who had given us an absolutely superb day out experiencing a taste of a different style of Canary Islands life. In the Canary Islands, there really is something for everyone!

To find out more and/or to make a booking of this fantastic trip with Tamarán Routes, speak to our head receptionist Gemma who went on this trip with us, or another of the reception team.

You can also find out more about this excellent 4 wheel drive excursion company, that was started back in 1987, on their website and social media: