Congratulations to Kevin and Lynda Wendt, who have won a free one week stay at Pearly Grey!

In January, at the end of their last stay here, they filled in one of our (relatively) new questionnaire forms and left it in the mailbox near reception. They were then randomly chosen from all of the questionnaires received during that 3 month period to win a free holiday!

They are the second winners in this contest, the first being Brian De Moulpied and Jacqueline Wales, who won in December, and will use their free week in September, 2008. 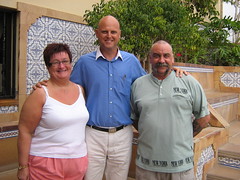 Make sure you fill in a questionnaire during your next trip, and you can have a chance at a free week at Pearly Grey!